The Saga of Serina the “Pit Bull” 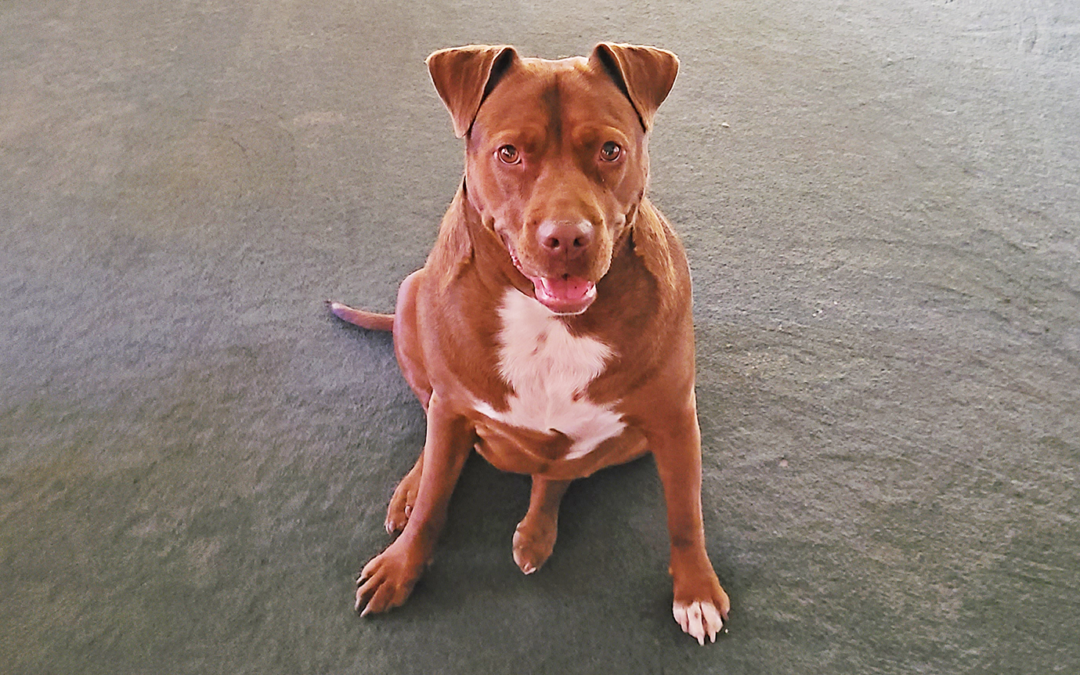 I was already involved in dog advocacy when I first met Serina the “pit bull”. Rescuers had found her scrambling to save her new puppies, just days old, from the rising floodwaters of Hurricane Harvey in Houston a few years back. As a resident of a city where her breed was banned, I would not have volunteered to foster her if I had known she was a “Pit bull” breed, but the rescue we were fostering for assured us she was a chocolate lab.

At first, I was annoyed at the deception. When they dropped her off, it was clear that she was one of the breeds restricted in the city. I moved to immediately call them and have them find a foster in a place where they were not restricted when a notion hit me that would change how I thought about breeds, rescues, and dogs in general. As I was dialing, I realized that this new young mother, and all her puppies would be murdered as a result of simply existing, and that I was their only chance at survival. I had seen a stat earlier that day that I didn’t really comprehend while reading it, that nearly three thousand “pit bull” breeds were euthanized every day, totaling nearly 1 million per year. The gravity of that number is hard to truly realize, that in every state, there are hundreds of these breeds being killed daily. The thought immediately gave me a new resolve and a new perspective – it wasn’t the breed responsible for the purported “aggression”, the fault lay entirely with humans.

For the next couple of months, my wife and I would work to find a home for all seven of the puppies, in areas where breed-specific legislation would not hinder their owners, preventing them from socialization, training, veterinary care, walks, and etc. Having no previous opinion on “pit bulls” or BSL at the time, I wanted to find out for myself whether or not this reputation was warranted, or whether this reputation was the product of something else. As the Founder of the National Dog Rescue Network, we had already worked with rescues in Colorado and California. I recalled previous conversations with rescue workers who indicated a shelter for a pit bull may as well be called “death row”.

Anecdotal evidence of Serina showed no aggression towards other dogs. She was a new mother, and would growl at times if any of our other dogs got too close, but overall her growls never turned to aggression. But just those growls would be enough to get her killed in a city where Breed-Specific Legislation was in place.

All breeds experience dog behavior. They are, in fact, dogs, and despite 30,000 years of domestication, they all still exhibit the behaviors of their species. Some bark, some are leash aggressive, some are territorial, some are food or bone aggressive, etc. Despite these issues, responsible owners are able to compensate for these behaviors spanning all breeds through training, socialization, or other elements of responsible dog ownership. If a dog displays any of these behaviors, it is rebuked and written off as the behaviors of a dog. If one of the breeds defined as “pit bull” does these things, they can be impounded and then killed in the cities of Denver and Aurora.

This approach to animal management only perpetuates a cycle of misunderstanding. If you prevent a breed from the normal development that we as humans understand is vital for good behavior, then we aren’t creating a safer community. If dog owners think that the wrong trainer or veterinarian could turn them in for trying to get medical care or training, then they would avoid these services. Fortunately no Veterinarian or Trainer in their right mind would ever do this, and there is a reason for that: because these professionals understand that breed-generalizations is a ridiculous and often discriminatory behavior not based in any fact.

People who claim that “pit bulls” were bred for aggression are ignorant to the reality of canine domestication. Until very recently, all large dogs were bred to be protective, or hunt game, or track humans & cargo. These are just appeals to the general nature of dogs, and exist in every breed as we have used dogs for a very limited set of purposes in the time with which we have domesticated them. It’s one of several lines of attacks that are used in order to promote fear and develop a narrative that has culminated in the murder of millions of dogs in America that may have otherwise been saved.

Humans have a responsibility to the animals we have domesticated. Rumor, innuendo, and scapegoating of a specific breed despite all data proving this narrative as false is beneath us, and a failure to live up to the responsibilities we have created through domestication.

I don’t know where Serina is now, or any of her puppies. I can only hope that she survived, found a family that loves her, and is living the life that over a million others of her breed will not get to enjoy this year. Considering that in the time it took for me to write this article, over a hundred more “pit bulls” were killed, I am not optimistic. It’s time to end outdated legislation that has failed to show any improvement in community safety, Denver. It is time to vote to remove Breed-Specific Legislation from our ordinance.